$377 Monthly Income💰 – US Election and Stocks

The US elections are coming to a close as I write this and it appears that Joe Biden it’s likely to become the next president as the final votes come in. So what does that say about our investments?

This week we witnessed a lot of volatility in the markets. Understandably, banks and energy got whipsawed the most since it’s pretty hard to predict how these industries would be affected under a new administration(let alone predict the election). Will banks be forced to reduce their leverage? Will pro-climate policies leave big energy in the dust?

The biggest threat the overall markets were facing was the potential reversal of the corporate tax cuts that the Trump administration implemented. Back in September, he pledged to roll back Trump’s corporate tax cuts on day one. Tax reform was the major catalyst for the “Trump rally” and if corporate taxes were ever raised back to where they were, you can bet that Wall St would take a nasty hit.

I don’t want to speculate too much about this but a smart politician would understand how damaging this would be so I don’t think he will follow through on that promise. If anything, he may only partially reverse it.

Technology has been a safe bet

We also noticed that investors started pouring into tech as election day got closer. Oddly enough, tech these days seems to be the safe haven for investors that don’t want exposure to government regulation. So why not buy into a sector, that has for a long time, been largely unregulated?

Thats exactly what I did. It was very hard to ditch high dividend-paying “old economy” stocks(energy, office reits etc) and replace them with “new economy” stocks(like solar and tech) that pay no dividends. Investors need to realize that they pay high dividends for a reason. They just simply can’t grow and there are no opportunities to invest back in their business.

Investors that get in on fast-growing industries now will be rewarded when they do start paying dividends. Your yeild-at-cost will be staggering as they keep raising the dividend and you continue to hold(at least that is the plan). Remember, Warren Buffet didn’t buy Coke AFTER it became established.

Personally, I have no playbook for the US elections. I’m a long term investor and I never intend on selling once I buy into a company. So what happens during a 4 year term has no effect on my investment philosophy.

My top holdings have dramatically changed with UpWork taking the top spot after they crushed Q3 earnings. I still think they have a lot of runway so I won’t be trimming my UpWork position for a long time. 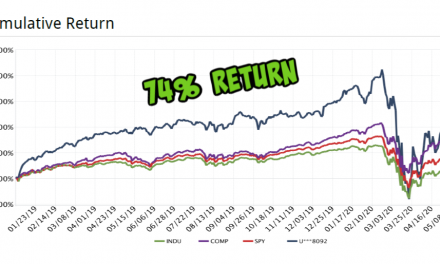